By March 31, three out of four Americans worked from home. Bank lobbies were locked, phone lines redirected, video chats had replaced corridor confabs. All for the greater good, the public health professionals had said, and hadn’t most of us quickly assented?

No one imagined such a turn just four weeks earlier, when associations had filled their calendars with education programs, seminars and trade shows, and were in full marketing mode.

One of the industry’s largest shows is the annual Mega-Conference, put on by the Indiana Bankers Association. The Mega-Conference attracts more than 1,200 people to the Indianapolis Convention Center each spring. Its 2020 Trade Show, featuring 98 companies exhibiting their products and services, was already sold out. But as the pandemic spread to the center of the country, bankers in Indiana started to wonder about IBA’s signature event.

“Mid May was still a ways away,” said Christina Bennett, vice president of meetings and events for the Indiana Bankers Association, about the discussion with leadership spurred by those inquiries. Ultimately, the IBA decided that once a stay-at-home order was lifted, people wouldn’t want to rush into large gatherings. 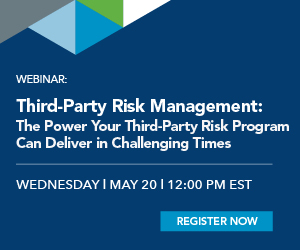 The IBA opted to postpone its “flagship” Mega-Conference until autumn rather than cancel because the conference contributes significantly to the association’s annual revenues. As of press time, the IBA was waiting for the venue to clear a new date for its event.

A perceived reluctance to rush into crowded hotel ballrooms also led the board of the Bank Holding Company Association to cancel its Spring Seminar in Minneapolis, which was scheduled for May 4-5, and was already being marketed. The board chose not to reschedule the event, which typically attracts more than 200 people, because the BHCA already has its Fall Seminar scheduled for Oct. 5-6.

Event cancellations have cascaded off of the Iowa Bankers Association meetings and events calendar. On March 11, the association pulled the plug on its in-person events for all of March. A week later, it had canceled all of its April events. By the end of March, IBA had pushed all of its programming to mid-summer and beyond.

“There was starting to be guidance from the CDC to not have meetings above a certain number,” said Ann Winkel, vice president of education. “We were starting to get calls and we knew there was a responsibility to not be part of the problem.

“It’s going to be a different year for sure,” Winkel said.

Iowa is deploying more webinars, but won’t take all of its education digital, Winkel said. “No one wants to sit in front of a screen for six hours.”

The Independent Community Bankers of Minnesota canceled its 2020 Capital Summit in Washington, scheduled for April 28-May 1. ICBM President and CEO Jim Amundson has quickly pivoted to working with officials from the Department of Employment and Economic Development and the Governor’s office to offer the community banking perspective on economic relief programs, such as the SBA’s Paycheck Protection Plan, said Matthew Doffing, vice president of marketing and communications. “We’re trying to give feedback about what it would be like to implement [these programs] at a community bank,” Doffing said.

The joint NDBA/SDBA convention, slated for early June, was canceled in early April. By April 10, the Texas Bankers Association postponed its annual convention, set to begin May 13 in San Antonio.

Indiana’s Bennett said the decision to push the IBA Mega-Conference to later in the year is not without risk. “Fall is a busy time of year for bankers and the competition for their time and attention is strong,” she said.

These meetings “really are about getting together,” Bennett said. “Sure, you learn things from speakers, but you also learn in the hallways, learn from your peers in conversations, learn while you’re sharing a meal. We didn’t want to lose that.”

From left, Patricia Barnas, Jennifer Marsh and Melanie Squires. First National Bank of Michigan will open a branch in Lansing,…