Ken Block is to the car world what the Kardashians are to makeup: influential, aspirational, cannily progressive, and emulated by millions. The 52-year-old stunt driver has nearly six million Instagram followers. His “Gymkhana” driving videos, named after the historic British motorsport events, command rapt attention from his legion fans. The latest one, “Climbkhana TWO”, set on the extreme edge of China’s serpentine Tianmen Mountain road, has 14 million views.


Every time Block hints he will make a new installment for his driving series — which combines death-defying driving skill on impossible roads, drifting as beautifully executed as Olympic dressage, and other behind-the-wheel acrobatics with dry humour and epic camera angles (search for “Ken Block + Randy’s Donuts”) — it’s a big deal. Block has implied that his newest video will showcase a new car — a build designed by Ash Thorp, the guy who designed the latest Batmobile. This levels to this are nearing nirvana for car aficionados.


What car will Block and Thorp use as a muse for this film, the concept body around which they’ll construct the latest custom build? Not some crazy Lamborghini, Ferrari hyperbeast, or modified monster truck. Block will use as his blueprint the humblest little pony car you could imagine: a Fox-body Mustang. 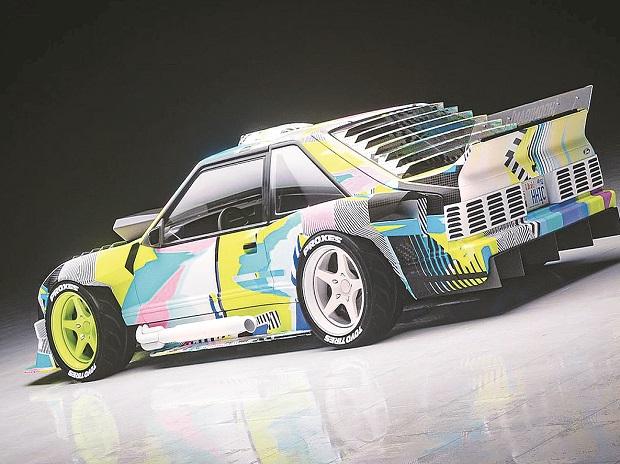 Ford made this scruffy ‘Stang for eons in car-life terms, from 1979 to 1993. It was named “Fox-body” because it was built on Ford’s “fox” platform that underpinned multiple coupes and sedans for decades for Ford, Mercury and Lincoln. The model was so affordable that Ford sold more than 2.6 million in total. They became ubiquitous in the 1980s, a low-rent version of the Lamborghini Countachs and Ferrari Testarossas made famous for being driven in the TV series Miami Vice.


That exact humble background and odd ’80s nature are precisely what drew Block to make one.


“The Fox-body happens to be from an era that I’m fond of — that whole look of the all-white Countach, and even the white Volkswagen Cabriolets prominent in the ’80s in that time,” says Block, speaking recently by phone from Park City, Utah. He has been there for weeks, he says, working out daily with his three kids and planning his next big shoots. “Those are my fond memories of that type of car, and the Fox-body just ties into that so well. I think they’re getting more popular — but I just did it because I like the ’80s.” Block, who is sponsored by Ford, has famously driven Ford Escorts and F-150 pickup trucks in the videos he shoots in such places as San Francisco, Los Angeles and Dubai. But he chose to modify the under-loved Mustang, a concept he has nicknamed “Hoonifox,” for good reason. The original model Fox-bodies had a tried-and-true Ford V8 engine, simple components made easy for modification, and the lightweight bodies — less than 3,500 pounds — that make them perfect for the kind of rally-style driving, slides, drifts, and jumps Block has become famous for executing in tiny downtown alleys and off the sides of cliffs. (Incidentally, when Block’s Hoonifox meets reality sometime in 2021, it’s likely to have his famous custom-built AWD system — and an all-new electric drivetrain. “I’m excited to experiment with that,” he says. “As much as I love combustion engines, I also love technology.”)


It’s not that big a divergence —over the course of its life cycle, the Fox-body Mustang came in many forms. Ford offered it variously with 120-horsepower to 210-horsepower four-cylinder, six-cylinder and V8 engines; rear-wheel-drive; a five-speed gearbox; a three-speed automatic gearbox; Cobra and Saleen editions; and a choice among “notchback,” hatchback, and convertible body styles. (A notch-body Mustang embodies the particular “notch” style design in which the trunk is less noticeable than the engine and passenger compartments.) Some years, it came with dual front headlights, other times with quad headlights. At one point in the ’80s, Ford even offered it as a Turbo GT and a performance-tuned SVO version.


The disparity between the Fox-body and the rest of the Mustang lineup is evident without even looking under the hood. While the original Mustangs had swooping rooflines and slightly flared fenders that looked fast standing still, the Fox-body version — with its stumpy, square hood and oddly slanted B-pillar just behind the driver — just looks … still.


Then there’s the interior: Few had air conditioning, radio, speakers, rear seats, or much sound insulation. The “rear seat” was accessible to adult forms only as a torture chamber; it wasn’t large enough to sit upright in without fear of knees, elbows, and head being bumped or twisted like pretzels.


It hasn’t stopped the inevitable 30-year rebound, though — the phenomenon that makes cars cool again after the kids who grew up with them as posters on the wall are old enough to make enough money to afford them.

Don't Miss it Record Christmas sales expected in Germany | Business
Up Next Apple Will Reopen a Few Stores Next Week, With Restrictions

Hit by economic slump due to Covid-19, the banking systems in emerging markets like India, Mexico, and…

September 22, 2020 4 min read Opinions expressed by Entrepreneur contributors are their own. A three-month hospital stay at age…

For depositors of the tainted Punjab and Maharashtra Cooperative (PMC) Bank, the situation is not very different…

Robinhood, the financial technology startup credited with helping popularize trading among millennials, has increased its latest funding round from investors…