Tim and Aaron Siegle, father and son, aren’t as alike as almost anyone might think.

“Yeah well I’m shrinking now, so you might catch up!”

Their laughs echo and harmonize.

Along with kindred dad jokes, North Dakotan cadences and a projection that could cross state lines, both of these Siegles are bankers.

They didn’t, however, have a typical family succession into the banking industry. They grew as independent bankers. Tim was the CEO at a bank headquartered in a town of 1,500 people in rural North Dakota. Aaron was a law student, an FDIC regulator, and a banker in urban Minnesota. Now, they work together, Aaron as president, Tim as CEO, of First Resource Bank, Lino Lakes, Minn., previously known as Eagle Valley Bank.

This is how their stories merged:

Two years after Tim Siegle graduated from Concordia College, St. Paul, in 1981, he joined his uncle Richard Solberg at State Bank of Fargo. He worked at what is now Bell Bank for 13 years. “I assumed that we’d probably live there, you know, forever until I retired,” he said. “And life would have been very good.”

But there were a few changes in the plan. In 1996, Tim, at the same age as Aaron is today, 37, left Fargo to invest in and run United Valley Bank in Cavalier, N.D. His daughter Sarah was in third grade, son Ryan was in the fifth, and Aaron, the oldest, was in eighth grade.

In the first handful of years Tim was in leadership, the formerly one-branch United Valley Bank in small-town North Dakota expanded to Grand Forks, and added or acquired a new branch about every three years after that: In Argile, Hallock, Lancaster, Mahnomen, and Twin Valley, Minn. After 23 years with Tim at the helm, the $435 million bank grew; it now has nine locations.

In 2008, Tim wanted to expand the bank into communities that were growing. He talked to a friend about branching United Valley in the Twin Cities. “If you sell hats, you go where the heads are,” Tim said. “In banking, you go where the people are.”

Aware of his unfamiliarity with the metropolitan market, Tim decided to get acquainted first. He invested in Eagle Valley Bank in Lino Lakes, Minn., and joined its board. At the time, the three major shareholders were Larry Holtz, who remains chair of the board at First Resource, John Seidel, director of special assets, and Tim.

Collectively, the three shareholders crafted a succession plan as Eagle Valley acquired and adopted the name of First Resource.

Aaron Siegle recalled when his dad came to his kindergarten class in Fargo to read a comic book about banking. He remembered that everywhere they went in 1988, whether in Fargo or Cavalier, “Dad knew someone.” Aaron’s Babe Ruth League baseball jersey read “State Bank” as he stepped to the plate. Tim, in the announcer’s box at the games, trumpeted his son’s introduction.

In 1996, the family headed to Cavalier (160 miles north of Fargo), after Tim and his wife Marci concluded that moving to a small town would be beneficial. As a teenager, Aaron was reluctant to leave his friends.

But it turned out for the best. “I learned how to meet new people, make new friends and adjust to change,” he said. During high school, Aaron mowed the lawn, painted the garage and hoed sugar beets for one of his dad’s partners at United Valley Bank. Eventually he went on to graduate from the same college as his dad (and his mom, his wife, and roughly 20 members of his extended family).

He continued his education at law school, where he was top of his class in ag law despite his meager farming debut as an adolescent beet harvester. Law degree fresh in his grip, Aaron joined the FDIC just as the recession hit. Eagle Valley Bank, was on the FDIC’s troubled bank list. At that point, the young Siegle knew two things: He didn’t want to retire as a regulator, and he’d always wanted to be a bank president.

After more than four years at the FDIC, Aaron joined Eagle Valley Bank as a commercial banker and analyst at the end of 2012. The bank, which was still under a consent order when Aaron joined, had around $65 million in assets when it started to rebound in 2014.

“Although Eagle Valley was under an order, my dad and his partners were not involved when decisions were made that resulted in the bank’s financial distress,” Aaron said. “I was excited for the opportunity to use my skill set from the FDIC to help the team improve the bank.”

In 2018, as the shareholders had planned, Eagle Valley acquired, and took the name First Resource Bank, which was previously owned by a pickle farmer from Florida. The bank had roughly $45 million in assets at the time. And Aaron became its president. “We didn’t have a huge staff, but the staff members we had were very good,” Aaron said.

Today, First Resource has more than $225 million in assets, about half the size of the bank Tim left in Cavalier. Tim is confident about the bank’s future. “I’m not stepping into something broken,” he said, acknowledging the bank’s recent growth.

Tim expressed gratitude to Holtz and Seidel, the other major shareholders of First Resource Bank, for their willingness to embrace a transition that would allow the father and son to work together, when they had little to benefit from the shift, Tim said. “Quite frankly, [Holtz and Seidel] own the majority of the bank, and they could’ve put the bank on the market.” 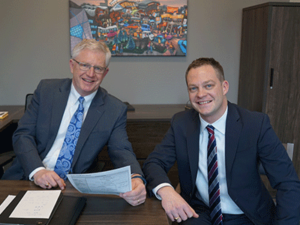 Today, both Siegles express a desire to create and maintain an atmosphere that employees enjoy working in. “The result of that hopefully becomes a really nice return for shareholders because when people like where they work, they come and they work hard, and just naturally they get after it because they’re proud of who they work for,” Tim Siegle said.

At First Resource, the Siegles are now working side by side as bankers, technically for the first time, though they’ve worked harmoniously through questions and issues for several years. “We put our heads together and figure out a result that makes sense,” Tim said. “It’s just that I’m physically here now.”

Tim has said for years that a bank is only as good as its employees, and the Siegles strive for that foundation. “Every bank sells money, right? You lend out money, and money is great. It’s the same color at every single bank,” Aaron Siegle said. “What differentiates us is how we go above and beyond. It’s teamwork and customer service.”

Tim led and grew United Valley Bank for 23 years in a way that’s driven the bottom line without being focused on the bottom line, “and I’ve seen that for the 37 years I’ve been living,” Aaron said.

Now, Aaron has developed his own managing technique that aims for the same relational and strategic growth, with a program called “Bring the Beef.” It was inspired by a viral phenomenon in which Morton’s Steakhouse met a hungry customer at Newark International Airport with a porterhouse steak after he had tweeted the request.

So as Morton’s brought the beef to the airport, First Resource aims to “Bring the Beef” by going above and beyond for its customers and fellow employees. For one quarter of the year, the staff nominate one another by submitting a “well done,” T-bone steak-shaped nomination slip when they see a staff member going out of their way for a customer. In 2019, the staff of 40 submitted 400 “well-done” slips, and shared their stories during a staff-wide grill out. The winner signs and receives a cow-head trophy that stays with the champion that year.

One of the hundreds of examples of the staff “bringing the beef” was when an employee, stranded by a snowstorm, had to stay at a nearby hotel overnight. She texted one of the commercial lenders who lived by her house, and he stopped to take her dog for a walk and blow the snow off her driveway.

Aaron reflected on a time a teller at the bank’s Stillwater, Minn., branch cultivated a friendship with an elderly customer who struggled with his memory. He would come in each day, and the two would enjoy conversations and coffee. The old man began bringing in his bills, and the teller would help him write the correct dollar amounts and address the envelopes. “That’s somebody’s grandpa,” Aaron said. “That’s somebody’s dad.”

U.S. stocks rallied Tuesday and the blue-chip index captured a psychological milestone as investors cheered progress toward a smooth transition…

When Joey Clark was able to reopen Kin, a boutique women’s clothing store located in Philadelphia, in June after being…

David Fettig When the COVID-19 pandemic began taking an economic toll in the United States in March 2020, it would…

Bank of Ghana governor, Ernest Addison The monetary policy committee of the Bank of Ghana voted to leave interest rates…

Dear Moneyist, In 2012, my daughter and her husband (at the time) wanted to start a business. She asked for…