FDIC-insured banks had net income of $18.5 billion in first quarter 2020, a decline of $42.2 billion (69.6 percent) from a year ago. Just over half of banks reported year-over-year declines in net income.

Deposits rose by $1.2 trillion in the first quarter from the previous quarter. On an annual basis, deposits grew by 13.3 percent, the largest year-over-year growth rate ever reported in the FDIC’s Quarterly Banking Profile.

Provision expenses increased by $38.8 billion, or 279.9 percent as a result of the economic decline, although adoption of CECL by some banks also added to that increase.

Loan balances increased by $442.9 billion during the first quarter, or 8 percent annually. This was the highest year-over-year growth rate since first quarter 2008. 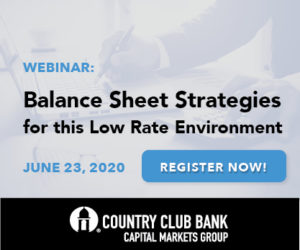 “Although bank earnings were negatively affected by increases in loan loss provisions, banks effectively supported individuals and businesses during this downturn through lending and other critical financial services,” said FDIC Chair Jelena McWilliams. “Notwithstanding these disruptions, at the end of the first quarter, bank capital and liquidity levels remain strong, asset quality metrics are stable, and the number of ‘problem banks’ remains near historic lows.”

Average net interest margin at community banks declined by 12 basis points to 3.55 percent. That was higher than the average for all banks of 3.13 percent in the first quarter, itself down from 3.42 percent a year prior.

Dear Moneyist, I didn’t want to put my parents at risk for Thanksgiving, so I booked a house on their…

Wall Street could get a shot in the arm in the coming months, while much of Main Street waits months…

Among the transitions people face in their lives, retirement often feels like the most definitive. The fact that this life…

Deutsche Boerse AG said late on Thursday that Siemens Energy AG will join the German MDAX index, which houses the…