Even as the spluttering $100 billion SoftBank Vision Fund (SVF) grapples with a severe crisis across its portfolio companies globally, compounded further by the coronavirus outbreak, the technology investor is on a lookout to snag new deals in India, a top executive at the Japanese firm told ET.

Rajeev Misra, who oversees the Vision Fund as its CEO, said the firm has $13 billion in unspent capital which they are in talks to deploy in India, and globally, amid doubts about the group’s ability to plough new funds into companies.

“We are actively looking at India, to invest at the right valuation. SVF1 and 2 are both interested in buying secondary positions from early-stage investors who are wanting to exit as their fund lives come to an end,” the SVF chief said “Next three months, we will announce deals as currently we are in mid-stages of talking to 15-20 companies for both secondary and primary investments.”

Misra and the overall Vision Fund have come under major scrutiny not only for their outsized bets on cash-guzzling and overpriced technology startups but also for the infighting at the firm. “The challenges we faced early on were common to fast-growing organizations and we’ve fostered major improvements in our culture. Our employee attrition rate is less than 5% and significantly lower than others in the industry,” he said when asked about the present situation at the world’s most-talked-about technology fund.

Even as the Vision Fund faces issues internally, the Japanese group has so far not been able to rack up its second edition, as external sponsors or limited partners have kept away from committing money after the debacle at WeWork and other highly valued startups.

Misra, however, expects the coronavirus outbreak to hasten a shift towards technology “SoftBank has invested $5 billion of its own in SVF 2 and we have spent $3 billion of it. We can put in some more, it won’t be an issue. We have multiple promising companies right now, Bytedance, food delivery players like Ele.me and Doordash, Coupang in Korea and Policybazaar, Delhivery, and Grofers. We are also convinced that because of Covid-19, the shift to technology will be more rapid.”

SVF1 has invested $81 billion, returned $10.7 billion to investors over the last three years with eight companies having gone public. “There are no more lock-ups on the public stocks and we can sell them tomorrow which would currently amount to $10.5 billion,” Misra said. “While Vision Fund net asset value or NAV is up since inception, we have taken aggressive markdowns in the last one year to reflect public market valuations.”

Prominent investors in the Vision Fund include the sovereign wealth funds of Saudi Arabia and Abu Dhabi, tech giant Apple, among others.

As for its India portfolio, SVF has marked down the $10-billion valuation of budget hotel chain, Oyo which has been among its most troubled portfolio firms locally, amid a $17-billion full-year loss at the Vision Fund. “Oyo expanded aggressively outside.. In India, they have tremendous penetration. Along with that, they are seeing a recovery in China where occupancy is back to satisfactory levels. They do not need capital for two years. Currently, they are changing their business and rationalising and will emerge stronger. But overall, it’s a good learning for the management while they are a private company.”

Oyo has fired thousands of employees worldwide, furloughed staff, and been in the line of fire with its hotel partners in India. Misra also said that the $2 billion debt picked by Ritesh Agarwal, the Oyo founder, which has been guaranteed by the SoftBank founder Masayoshi Son, was his personal investment. 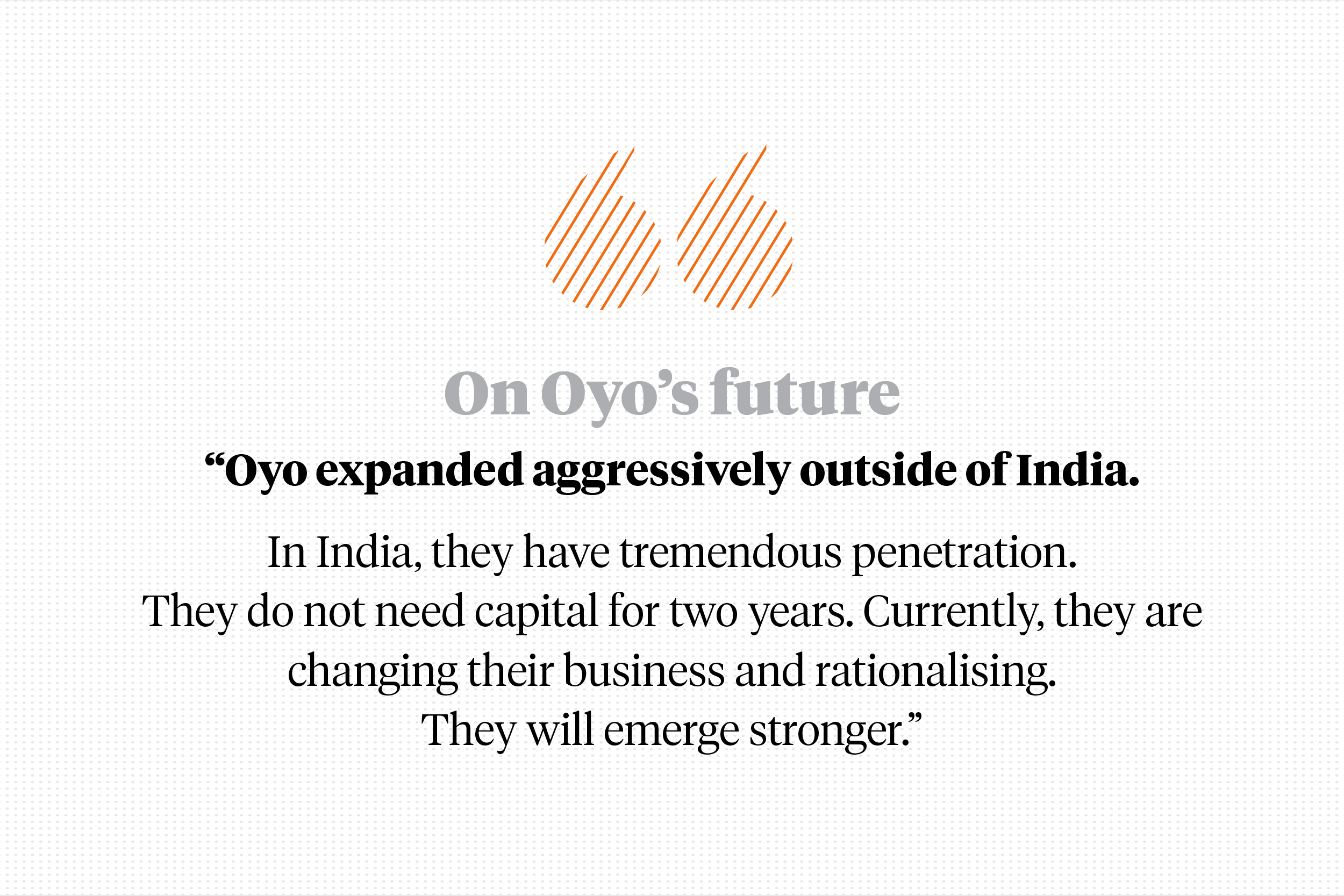 Other SVF portfolio companies like online payments firm, Paytm, which Misra said is again not in need of new capital, will face more competition with the recent announcement of Facebook’s $5.7 billion investment in Reliance Jio Platforms. Facebook which will push its WhatsApp Pay to go fully live through Reliance’s e-commerce vehicle JioMart, is being seen as a huge threat to all incumbents. Misra said consolidation is inevitable going forward in the Indian tech ecosystem and only companies backed by deep-pocketed investors and strategies will survive in the post-Covid-19 world.

“India will see consolidation as there are too many players in sectors like e-pharmacy, office sharing, grocery delivery, e-fitness, education… Stronger players with capital who can make acquisitions and consolidate will have an advantage. Our portfolio companies are all tech-enabled and will gain, as brick-and-mortar won’t be able to compete.” he said.

Misra said even though the Jio-Facebook combine will be a formidable competitor, Paytm has always faced competition whether it’s from Google Pay or Walmart-owned PhonePe. “The Facebook-Jio partnership will accelerate the digitalisation of India which is good both for the country and for our portfolio of tech-enabled businesses in the country,” he said. Paytm is the market leader in person-to-merchant payments.

SoftBank’s massive exposure to shared economy startups including the ones in the mobility space like Uber, China’s Didi Chuxing and India’s Ola has seen businesses get walloped with due to the Covid-19 pandemic. But, according to Misra, these companies will gain in the long term.

“Gig economy will outperform going forward as social distancing will remain but people will not go into crowded theatres, restaurants, instead they will use online services, prefer to take rideshare, than public transport.We did not invest in the old industry but have backed asset-light tech-enabled businesses.and they will be the winners as there is a seminal shift in human behaviour,” he said.

Don't Miss it Facebook pulls back on Campaign Budget Optimization mandate
Up Next Drone Deliveries, Food Supplies, and More Car News This Week

Observe.ai, a startup developing AI-based transcription and analytics software for call centres, has raised $54 million in its Series B…

September 22, 2020 6 min read Opinions expressed by Entrepreneur contributors are their own. It’s been a struggle trying to…

HDFC Bank has put out on its website eligibility rules for loan restructuring, explaining what the scheme…

September 21, 2020 5 min read Opinions expressed by Entrepreneur contributors are their own. Becoming an entrepreneur can seem like…

Lending platform mPokket on Monday said it will disburse Rs 1,200 crore loan to college students and…